This project has been offered a residency at the Bora Bora Residency Center,

The grasshopper and the sound design.  More -

enhances the expression of the performer,

and these dress characters have evolved into creatures

and what other people think about them.

They have become something life-affirming and highly energetic.

There is a place on Mols in Denmark, called Poskær stonehouse, a prehistoric megalithic construction or dolmen if you like, because there is no exact documentation of what this place was actually used for, or what it was. When you stand there alone

in the summer, one can easily imagine rituals that probably have taken place there, with dancing, music and costumes.

Rituals that should open up and make a pathway to the supernatural spirit world.

With a top stone weighing 11.5 tons, and built around 3300 bc. this place oozes of something ancient and forgotten, noble and powerful.

And it's this fascination of digging up something tangible in both our history and in us as human beings, both literally but also

on a more spiritual level, that is the core inspiration.

And do we today possess this power that they likely did 5000 years ago? We are quick to conclude, no! We think that we as a modern human are wiser and just know more than the ancient peoples, but are we and do we? Do we not lack this power and strength that Poskær Stonehouse still radiates? Have we lost our primordial power/force of nature, have we lost total connection with nature, our planet and ourselves? Deep-seated issues and questions that are more relevant than ever in times of climate change, little respect for nature, unhealthy materialism and now yes .. pandemics.

The dancer who wears the crown becomes exalted beyond being a ¨simple¨ human being. The dancer becomes a feeling and a force that represents something inside of us. The crown and the hooded dress, are thus two different states of consciousness that are explored in this project. But both are an entrance to the parallel world or the supernatural world.

¨They have become something life-affirming and 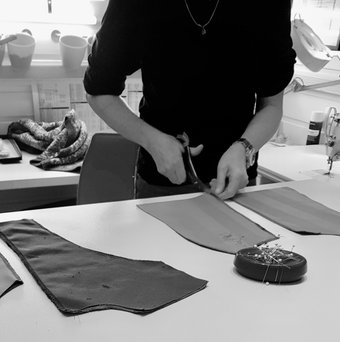 The dresses have become a symbol of a culture and an imaginary society that does not exist. They have created their own fantasy world and fantasy culture. 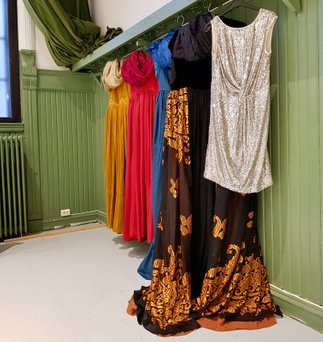 The colours are warm such as yellow ochre, orange, a bright warm red and a warm bluish green teal. Representing the autumn colours and the changeability nature and specifically autumn represents. The texture of the fabrics are also chosen in relation to how they compliment each other on stage, the red is a solid color with subtle stripes, the blue-green teal has a small flower damask pattern, while the black has a large and distinct contrast pattern in orange and black, this particular dress is also sewn in a viscose fabric, which gives it a floating lightness. This lightness contrasts the ochre/yellow dress, a dress sewn in a much heavier cotton velvet fabric which at times inhibits how the dancer can move in the dress. This dress is also the only one in a solid color with no pattern, here again to emphasize the heaviness of the dress and character All these aspects and details would later underline how the dancers approached and adapted building their character.

The dresses were never meant to be completely identical, as they stand out more with minor but subtle differences. Nevertheless they are all sewn with a tailored empire waistline, that gives the dancer a slightly childish and genderless expression. And it quickly became the dancers own choice what age and gender their character was.

In view of all this, the dancers very quickly moved into a different world. Just the way they entered the stage and lined up in a simple row was strongly influenced by the dress costume. The dress had a tremendous influence on how they moved and how the character evolved. This character the performer found became their story or the story of the dress, which did not necessarily have anything in common with the stories of the other dress characters. 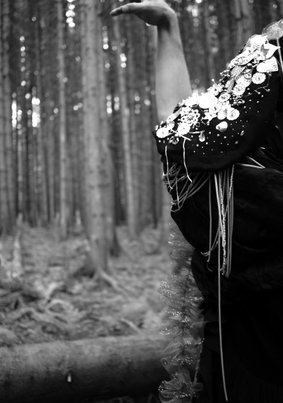 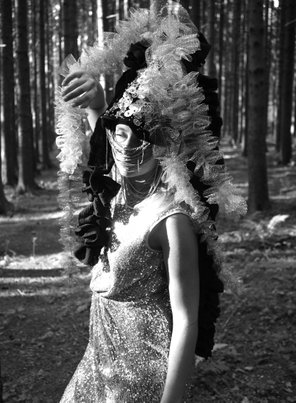